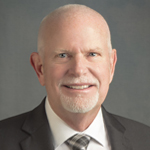 Mark coordinates the development of policies and procedures for estimating, purchasing, and project management among Dalmatian Fire’s Indianapolis, Cincinnati, Columbus, and Louisville branches.

Mark started in the fire protection industry in 1980, and has been a Dalmatian Fire team member since 1989.

He began his career in the industry as a Project Designer/Manager, and then moved through various roles of increasing responsibility. This included nearly 15 years each as Project Estimator and Vice President of Estimating, before progressing into his current position as Vice President Operations.

Throughout his career, Mark has worked on hundreds of projects in a range of markets including aviation, hospitality, healthcare, and public institutions.

He is a member of the National Fire Sprinkler Association and the American Society of Professional Estimators.

Outside of work, Mark enjoys playing golf, traveling, participating in outdoor activities, and spending time with family. He and his wife have two children who are veterans of the U.S. Armed Forces, and one grandson.